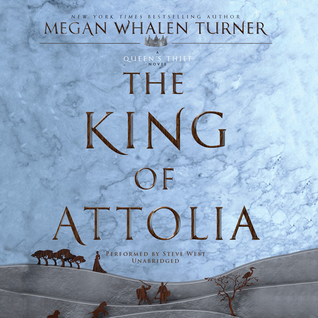 Title: The King of Attolia (The Queen’s Thief #3)

There is NO synopsis for this book because it spoils the ending of The Queen of Attolia (#2). If you want to know about the first 2 books, here are my reviews for them to get a general idea.

I still love how this series is very refreshing, with mythology, characters and writing style that’s completely the author’s own voice. While I do suggest to possibly grab a physical copy to have handy for this one, it’s still a good installment. But for now, I’ll take a short break from this deeply detailed series.

If you’ve read this series, was this one your favorite? Did you pick some stuff? Should I start the next book? Thanks for stopping by and have a great day, guys!