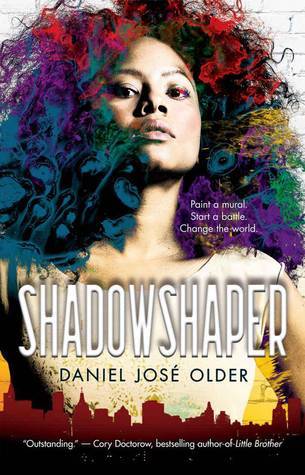 Goodreads Synopsis:  Sierra Santiago planned an easy summer of making art and hanging out with her friends. But then a corpse crashes the first party of the season. Her stroke-ridden grandfather starts apologizing over and over. And when the murals in her neighborhood begin to weep real tears… Well, something more sinister than the usual Brooklyn ruckus is going on.With the help of a fellow artist named Robbie, Sierra discovers shadowshaping, a thrilling magic that infuses ancestral spirits into paintings, music, and stories. But someone is killing the shadowshapers one by one — and the killer believes Sierra is hiding their greatest secret.

With the reading slump I’ve been in, I decided to see if doing more audio books would help. This audio book was available through my Overdrive library app and decided to go for it. I originally saw this book on Sam from Thoughts on Tomes’s channel and it sounded interesting at the time. But while the beginning had a great pacing and atmosphere, it ended up falling flat for me.

I’m really sad that I didn’t enjoy this book. The narrator was good but the gas ran out at the end. I don’t think I’ll do the second book, but maybe I’ll read reviews of it when it comes out. If you’re needing another diverse book, try this one if it sounds good to you. Have you read this book? If so, what did yo think?

One thought on “Mini Review: Shadowshaper”