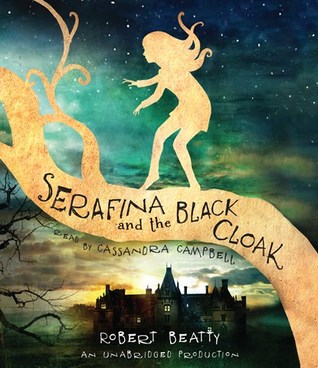 I have seen this series floating a bit on Booktube as the books have been coming out. I hadn’t read middle grade since I was the proper age, but decided to give it a shot since Overdrive had it available and that it was under 10 hours. What did I think of it? Let’s jump in!

Goodreads Synopsis: Serafina has never had a reason to disobey her pa and venture beyond the grounds of the Biltmore estate. There’s plenty to explore in her grand home, although she must take care to never be seen. None of the rich folk upstairs know that Serafina exists; she and her pa, the estate’s maintenance man, have secretly lived in the basement for as long as Serafina can remember. But when children at the estate start disappearing, only Serafina knows who the culprit is: a terrifying man in a black cloak who stalks Biltmore’s corridors at night. Following her own harrowing escape, Serafina risks everything by joining forces with Braeden Vanderbilt, the young nephew of the Biltmore’s owners. Braeden and Serafina must uncover the Man in the Black Cloak’s true identity . . . before all of the children vanish one by one.

Narrator: I’ll start with the narrator. I had listened to 2 previous audio books by Campbell and at first, I thought I didn’t like her narration style. Sometimes she said words funny and didn’t have the tone to match the character. But this was a great narration by her! I loved the voice she gave to Serafina and even added a bit of creepy to the darker parts as well. I couldn’t imagine anyone else doing this audio book. If you know of kids who want a Halloween type book, or a good car trip book, this would be a great choice.

Characters: The best of this book was Serafina herself. She is a critical thinker, which has been a bit hard to find in books these days. She remembers her father taught her to find safety or defend herself. She loves wandering around the house’s basement at night hunting rats. As the plot thickened with the man in the black cloak, she showed many sides to her character that made her really fleshed out: nervous, terror, anger, power and thinking things through. Braden was a decent male character, although he wasn’t as fleshed out as Sera was. Both did seem to have a bit too eloquent of dialogue for children who don’t to hardly anyone; I think they should’ve been a bit more socially awkward, but it’s a small nitpick. I also really enjoyed Serafina’s father. His protectiveness of Sera is touching and he tries so hard to be a parent to his best ability. He’s a present parent character that adults will enjoy seeing.

However, the villain was kinda typical for a kids book. He wasn’t really that scary and not all that smart at times. While I know that this is a middle grade book, you can have a smart and creepy villain without going too far. I also think that minor characters that did some have speaking parts were thrown to the side once they were done.

Plot: The plot was fast paced if not a bit predictable. I figured out a big part of the ending very early on, and as the author explains that revelation, it’s a little overdone. I also feel like the man in the black cloak wasn’t enough of a threat since he doesn’t appear very much. He was a bit too elusive to be a threat like the main characters were treating him. But I was wondering what would happen, so it was solid enough to finish the story.

Writing: The writing was good for the most part. He described the old house, creepy forest and animals very well. You could also tell when the kids were talking compared to the adults. That was done very well (something I tend to really nitpick) and the adults were present to help the kids when trouble came. But the one thing I noticed was that some of his word choices to describe something didn’t fit what was  happening. But it only comes up a few times. Kids wouldn’t notice those things. It’s a small nitpick.

But there were many great quotes of being brave, accepting who you are, etc. and I know this is a good example of a great middle grade book. Seeing those positive messages is great for kids to read and I definitely recommend this as a family book to be read and discussed together.

Overall: This was a good book overall. It didn’t blow my mind at all, but I finished it and liked the narration. I don’t know when I’ll get to the next book, but I think older kids (about age 9 and older) who love to read will enjoy this fun first book. Plus,there’s nothing too scary in here to make adults concerned.

Have you read this book? Have you wanted to start this series? Do you have other middle grade recommendations?