I hope everyone had a great holiday and good New Year so far! I swear so much time of the year just becomes a blur and before you know it, a new year is here! Today I’m sharing my small December wrap up and also wanted to share some pictures of Leo, whose a whole year old now! 🙂

In my review that I wrote about this book, I was never planning on reading it in the beginning. The small references to ACOTAR turned me off, until a co-worker read it and really liked it (and who hadn’t read ACOTAR). So I got it from the library and I was blown away 🙂 I don’t read fairy books; the only series I have read that has fae is the Dresden Files. So while I knew about some of the fairy folklore, I just loved this story and Isobel as a character. It was wonderfully written, a great female MC that defies many common YA stereotypes and pretty good pacing. I know this has been dividing people, but I can’t wait to see what this author writes next. I had that magical reading feeling every time I opened the book and that’s pretty special.

5 Reasons Why An Enchantment of Ravens Worked For Me

OH MAN! Sanderson does it again! At first, I had thought that this book was slow and not quite enjoying parts of it. But as time went on, this book became an emotional and rewarding book. This is the most emotional book so far in this epic fantasy series and I love the themes of: forgiveness, accepting yourself, facing your fears instead of hiding behind them and someone is still redeemable when broken. If you know about Dalinar in this series, my eyes were opened to his character and everything with him was amazing. There’s also a few hilarious quotes I had fun talking with my husband about. I am going to have a series so far review coming up soon! I’ll talk about the first 3 books and the novella that’s published so far; Sanderson does take a few  years writing this large tomes, but if you’re at all interested in this series, stay tuned for my “series so far” review 🙂

And here’s where the reading hit a sour note for the end of 2017. I was invited by the publisher to do a blog tour for this book and I was interested to see what I would think of this book. I had read one other book by this author last year and it was ok. But this was worse. While the synopsis promises Norse mythology, the actual Norse elements are very sparse in this book. This future world of our wold has EVERY supernatural creature you can think of, so it’s very distracting to see vampires, incubus, types of angels and other creatures instead of the Norse creatures. I did do a mini review on Thursday if you want to know more of my thoughts. But this terrible world building, poor pacing, no chemistry in the romance and it’s apparent this author isn’t for me.

Blog Tour Mini Review: Between the Blade and the Heart 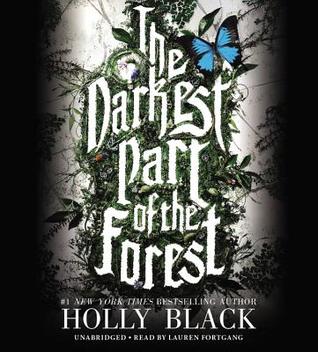 This is my first Holly Black book, since I’ve been hearing SO much hype surrounding The Cruel Prince. This is a stand alone about two siblings who have been obsessed with a boy in a glass coffin. When the horned boy wakes up, things start to get interesting. With where I’m at now, I liking hearing the fairy mythology set in this town that sits next to the realm of the fae. It’s a good audio book with a great narrator; it’s nothing special right now, but we shall see what happens.

I got this from NetGalley at the end of the year, so I was excited to get this ARC. I haven’t read anything by this author and I haven’t heard much about this yet. But it’s a fantasy where a young girl from the desert gets married to the king of the Bone Lands and he’s not a great guy. But she starts to realize she has earth powers, which causes her to fear for her life, since Elementae (the magic users) are persecuted by her husband. So far, it’s really good with another great MC that doesn’t have the normal annoying YA personality stereotypes. So I’m interested to see how this ends 🙂

So if you’ve been following me for some time, you’ll know that I got a puppy back in February of 2017. Well, he celebrated his first birthday at the beginning of December! He’s now 75 lbs of Labrador cuteness! Here’s some recent pictures:

It’s been crazy how big he’s gotten now. This past year has been quite the adventure with learning how to train a dog. But he’s always been cute, behaves most of the time and quickly became hyper-social with every animal and person. He’s my best friend 🙂

What was your favorite book of December? Did you get any books for Christmas? Have you read any of these books? If so, what did you think of them?