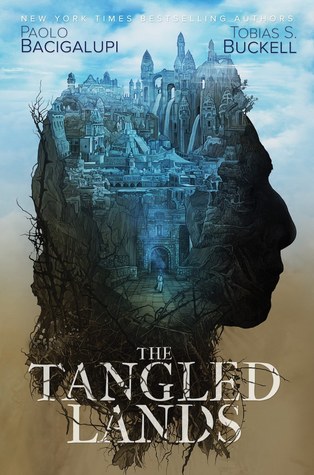 *I received this from the publisher via NetGalley in exchange for review. All thoughts are my own always. Due to the request of the publisher, no quotes from the book will be used in this review.*

Synopsis: Told in four short stories, this fantasy novel is set in a world where bramble spreads and chokes the land, leaving all who touch it in a inescapable sleep. The different lands haven’t found a way to kill the bramble, causing people to starve, flee their homes and become refugees. In Khaim, the last city to not be consumed by bramble, is run a corrupted mayor and his magical right hand man. The spread of bramble and corruption causes the people to rise against him.

When I saw this on NetGalley and read the synopsis, I was very intrigued. I had never read anything by these authors before. But ultimately, while this had such great potential in some areas, it failed in others. Let’s break down the stories:

Overall: While I loved seeing the original world building, the danger of the bramble, the ideas of knowledge, freedom, family and corruption and some of the descriptions of magic, I just wanted more from this book. I was hoping for things to either tie together or to have an actual ending. The afterword explains that the authors want to write more in this world and if they do, with answering some questions, I think I would read more. But so far, this is a standalone work and it felt unfinished and half the stories weren’t written as well as the other two stories. It was an okay book, just not quite satisfying enough for me. A big thanks to the publisher for sending me an ARC for review!

Have you heard of this book? Do you think it sounds good? Have you read anything by either of these authors?

One thought on “ARC Review: The Tangled Lands”