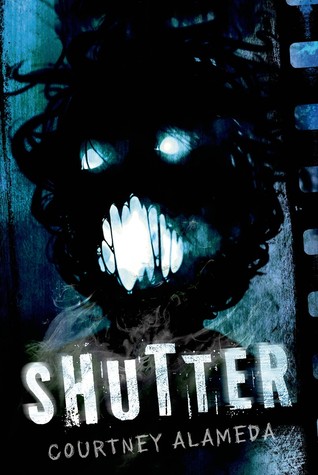 Goodreads Synopsis: Micheline Helsing is a tetrachromat—a girl who sees the auras of the undead in a prismatic spectrum. As one of the last descendants of the Van Helsing lineage, she has trained since childhood to destroy monsters both corporeal and spiritual: the corporeal undead go down by the bullet, the spiritual undead by the lens. With an analog SLR camera as her best weapon, Micheline exorcises ghosts by capturing their spiritual energy on film. She’s aided by her crew: Oliver, a techno-whiz and the boy who developed her camera’s technology; Jude, who can predict death; and Ryder, the boy Micheline has known and loved forever.

When a routine ghost hunt goes awry, Micheline and the boys are infected with a curse known as a soulchain. As the ghostly chains spread through their bodies, Micheline learns that if she doesn’t exorcise her entity in seven days or less, she and her friends will die. Now pursued as a renegade agent by her monster-hunting father, Leonard Helsing, she must track and destroy an entity more powerful than anything she’s faced before . . . or die trying.

This was a random impulse check out from my Overdrive, wondering what I would think of it. I had heard snippets of people talking about her new book Pitch Dark. Plus the cover and synopsis just drew me in. Here’s five reasons to read this debut novel:

“A tetrachromat saw a ghost haloed in violet light, an ability granted by the presence of a fourth color receptor in the retina. That fourth cone allowed me to see the spiritual auras of the undead—called ghostlight—in an explosion of color and luminescence. In short, I saw dead people in Technicolor.” (First chapter, 1 % mark)

“Most tetros trapped a ghost’s energy using charged silver panes, which were later dipped in insulating glass to keep the ghost from escaping back into the living world. I preferred to play offense, and my methodology of using cameras and analog film was maverick. I imprisoned ghostlight using a technique known as shutter drag, which required me to shoot a ghost several times on one frame of film. High-powered quartz lenses allowed me to capture light effectively, as quartz conducted a ghost’s electricity and had a high sensitivity to fast-moving violet light. Most ghosts succumbed in a few photographs, their energy whittled down shot by shot and sealed into film’s silver halide trap.” ( 4% mark)

3. Pacing: This was a creepy thrill ride! Once Micheline enters the hospital, the story doens’t relent as they run for their lives, seek out the identity of the one who gave them their marks. The stakes are high as they aren’t sure who to trust as they run from Helsing Corp when no one gives them a chance to explain. I loved how the author layered the character’s humor, emotion and growth as the story went on. While some people might not like that one small plot thread isn’t completely resolved, I didn’t mind because it wasn’t the main focus of the story. The main plot and subplot were resolved in a fantastic way and I was never bored while reading.

4. Great Female Lead: I loved Micheline so much! Growing up as a Helsing, she doesn’t take crap from people. She knows what she saw in the hospital and is determined to save herself and her friends. I actually liked being in her head as we explored her past, her feelings and her fierce stubbornness to find the truth. She does make some surprising decisions, but her confidence in herself, even when she’s scared, made me respect her. She never wavered completely for her feelings for Ryder like many other female leads have. Sure they care about each other, but they quickly go back to what’s important and get their job done. This is a female lead that’s strong, while giving herself time to grief and be scared when she actually feels those things. I also liked seeing her relationship with her dad; it spoke a lot to the growth she would go through.

5.  Fulfilled Standalone: Yep, this is a standalone and it’s a great one! There are standalones out there that feel like it either needs more pages or a second book to complete the story. But this one never felt like that. I would love a companion or a sequel just because this world she’s created has so much potential. Regardless, you get so many questions answered, great character growth, explanations of how things work, great imagination and polished writing for a debut novel 🙂 I really hope you guys check this out if you like supernatural stuff and even want a story centered around a Van Helsing!

Have you read this book? Have you heard of it? What other supernatural books do you recommend?