This past Wednesday, Bustle revealed the cover and full synopsis for Cat Winters’s new novel, set to release on April 16th, 2019. When I went to a book signing for her back in September 2017, she had vaguely mentioned that her next novel was going to be about a historical figure in their teenage years. Upon hearing that, I was imagining a ton of historical figures that she was going to write about. Now all the info is here! Here’s the gorgeous cover and tantalizing synopsis! 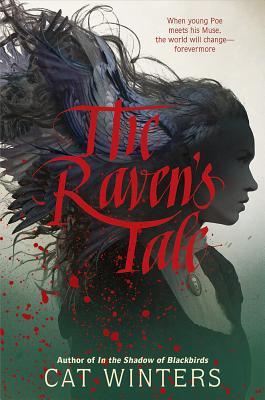 Goodreads Synopsis: Seventeen-year-old Edgar Poe counts down the days until he can escape his foster family—the wealthy Allans of Richmond, Virginia. He hungers for his upcoming life as a student at the prestigious new university, almost as much as he longs to marry his beloved Elmira Royster. However, on the brink of his departure, all his plans go awry when a macabre Muse named Lenore appears to him. Muses are frightful creatures that lead Artists down a path of ruin and disgrace, and no respectable person could possibly understand or accept them. But Lenore steps out of the shadows with one request: “Let them see me!”

You guys, I couldn’t be more ecstatic about this new novel. When I randomly picked up her debut novel In the Shadow of Blackbirds last year, I had no idea of how I would be ensnared by Winters’s atmospheric, historically creepy and moving novels. All of her books take place in the 1900’s and center around a story with a paranormal aspect. From spirit photography, ghosts on a road to creatures claimed to be a myth. Her YA novels really taught me some parts in history that are under the radar in history classes and the novels that do have historical photographs in them add more honesty and darkness to the story.

So with this new novel centering around American author Edgar Allen Poe, there is a wealth of potential here. If you are familiar with Poe’s work, they are dark, sometime ambiguous and don’t shy away from creepy and macabre imagery. I think what will be the most exciting aspect for me in this book is finding out how Winters uses Poe’s writings in the novel. I’m assuming that his most known work, the poem The Raven will be the most used piece. Does this Muse in the novel inspire the piece? Do his writings start out more innocent, like Annabel Lee and then descend into more darker writings like Masque of the Red Death? I love that there’s mystery surrounding how his writings will be featured in the novel.

I am also hoping that this novel will have historical photos in it, like her first three YA novels. Her two adult novels and recent YA release Odd and True don’t have the photos in the book. I think having some pictures and possible samples of his actual writing will help us sink further into the story. But not only photos would be effective, there could be pieces of artwork featured as well? There is also extra reading sections at the end of the novel that the author always includes, which is where I have learned more great historical facts, so that should be another great part to look forward to.

If you like books like The Diviners, books set in history with a bit more of paranormal flavor to them, please go read Cat Winters’s books. She has 6 novels out right now, with great themes of feminism, courage, strength and also with great family dynamics in some of them as well. Her writing has always stood out to me as some of the best YA writers out there; she never sugarcoats anything, giving you raw and intriguing stories that will always hook you in. Her upcoming novel is one I will predict that will grab a lot of new fans to her books, as it should 🙂

4 thoughts on “This is NOT a Drill! Here’s Cat Winter’s New Upcoming Novel!”