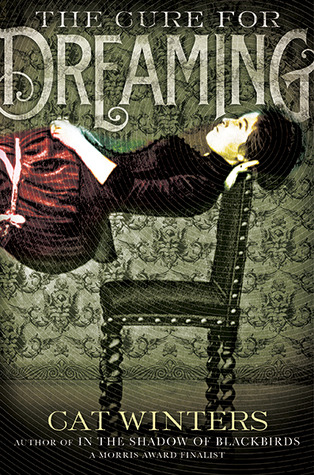 Title: The Cure For Dreaming

Goodreads Synopsis: Olivia Mead is a headstrong, independent girl—a suffragist—in an age that prefers its girls to be docile. It’s 1900 in Oregon, and Olivia’s father, concerned that she’s headed for trouble, convinces a stage mesmerist to try to hypnotize the rebellion out of her. But the hypnotist, an intriguing young man named Henri Reverie, gives her a terrible gift instead: she’s able to see people’s true natures, manifesting as visions of darkness and goodness, while also unable to speak her true thoughts out loud. These supernatural challenges only make Olivia more determined to speak her mind, and so she’s drawn into a dangerous relationship with the hypnotist and his mysterious motives, all while secretly fighting for the rights of women.

I have been a huge fan of Cat Winters’s novels since last year with discovering her debut novel from my library. Now I have officially read all of her YA novels with this one, set in 1900 Oregon. I was very intrigued to see how this novel would play with the paranormal element and the overall story in general. While it’s not my favorite novel of hers, it still has some great powerful themes and awesome historical photos. Here’s the breakdown:

Plot/Pacing: The overall plot itself about a girl being hypnotized to “cure” her rebellious thoughts sounds powerful and intense, especially with seeing how she overcomes this awful situation. The plot doesn’t shy away from the enraged frustration of her dentist father who refuses to understand his daughter. It gets even darker when her father starts forcing the hypnotist to start making Olivia a forced “example of curing female rebellion.” It gets hard to read at times, seeing how people either laugh at her or don’t believe her pain she’s going through. But Winters doesn’t stop there; she also offers mercy, hope and kindness amidst the pressing expectations from society. But the pacing itself isn’t quite as good as her other books like The Steep and Thorny Way. At times, it can feel stalled or a little repetitive towards the middle.

Writing: Once again, Cat Winters never fails to draw me in with her writing style. She has a real talent for creating imagery and letting the setting almost be a character itself. Here are a few examples of this:

“The Metropolitan Theater simmered with the heat of more than a thousand bodies packed together in red velvet chairs. My nose itched from the lingering scent of cigarette smoke wafting off the gentlemen’s coats-a burning odor that added to the sensation that we were all seated inside a beautiful oven, waiting to broiled. Even the cloud of warring perfumes hanging over the audience smelled overcook, like toast gone crisp and black.” (pg. 1, opening paragraph)

“He stood in front of me and trapped me again with those unshakable eyes. The flaws in his skin and light stubble on his chin faded to insignificant blurs compared to those two orbs of brilliant blue. My breath grew shallow and fluttery. My veins seemed to flow with hazy waves of Father’s laughing gas instead of blood.” (pg. 62)

“Furthermore, you have no need to fear that we would forgo our domestic duties if we were to become voting citizens, for we have been trained all our lives to balance a multitude of tasks. We do not let our homes fall into ruin simply because we have been given more item to accomplish. Worry more about the males who have only one job and no household chores. Their minds are more likely to stray than ours.” (pg. 88)

“Something on the far corner of the bed caught my attention: a short blink of candlelight that faded the second after I spotted it, as if someone had snuffed out a flame. I tensed, for I saw a pair of eyes watching from the darkness. Before I could ask Henry what I’d just seen, the light brightened again, illuminating the face of a girl. A moment later, it flickered away, and the bed lay empty.” (pg. 195)

“Unlike the last time I joined him in such a way, it was the audience below us that resembled the devils, not he. No matter how hard I blinked, I couldn’t shake the sight of sharp teeth, anemic skin, and hungry stares in that sea of sky-high pompadours and slicked male hair that glistened with greasy spiced oils.” (pg. 300)

Characters: Olivia is another standout protagonist that Winters that always delivers! She wants to be a writer, go to university and be free of her father’s constrictions. She’s tired of being stuck under her father’s “Mead the Mad” shadow and constantly being told that she needs to be a “proper woman.” She is a girl fighting for her own agency without stooping down to the other persons’s level to get even, which is truly admirable. She even shows kindness to those who tease and wrong her in the end, showing balance and humanity that I feel like is missing in YA.

Then there’s Henry and Genevieve, the hypnotist and his sister that play a key role in his story. I liked how Winter’s played with Henry’s character, seeming like a puffy confident mesmerist who knows what he’s doing. But he forms a great partnership with Olivia once her visions get worse and when her father starts intervening and becomes more desperate and angry. His past fills in his personality and his true intentions show him to be a great person. Genevieve has a smaller role being his sister, but their dynamic feels like a deep and touching sibling relationship that I can relate to. Without giving anymore away, these two are some of my favorite side characters Winters has created.

Paranormal Element: Every novel by Winters has a paranormal element in her novels, whether its spirit photography to a possible devil in New Jersey. This one is more psychological, as Olivia can see people as they truly are after she’s hypnotized. A major influence to this book is Dracula which was published 3 years before this book takes place and quotes from the book are used. Olivia sees people as ghoulish creatures with bloody mouths and lips and at times, its a great metaphor for seeing the worst in people. Sadly, this paranormal element feels a bit underused compared to her other novels. The visions felt kinda sparse in the novel and are very brief when they do happen. It feels like it’s just a metaphor and I never felt like the line between sanity and reality felt blurred like some of the reviews mention. I wish it had gone a bit further, but it’s still good enough to fit the plot.

Themes/Messages: As with all of her books, the messages of: independence, inner strength, overcoming social expectations and being true to yourself are always necessary messages teen readers. This is a feminist book that, to me, truly shows what true feminism means. Olivia wants to be able to carry out her dreams and her frustrations are valid with her father ignoring her and planning everything for her and verbally abusing her. But she finds non-violent ways to explore her inner feelings and her statements in her letters are empowering to all and she reaches out both to men and women to help see that they can be better. These themes are just as strong as The Steep and Thorny Way.

Overall: While the paranormal element, final confrontations and the plot were underwhelming, this is still a solid book from an auto-buy author. The themes are powerful, great side characters and her signature quote worthy writing.

Have you read this book? What other books by Cat Winters have  you read? What historical fiction books would you recommend?

5 thoughts on “The Cure For Dreaming: A Review”