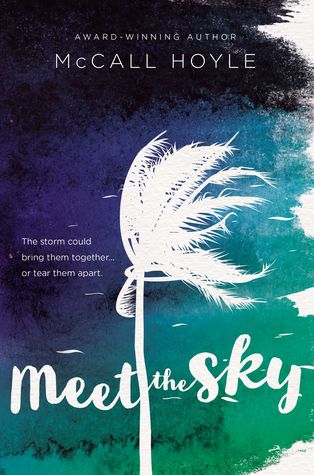 *I received this physical ARC from the publicist Megan Beatie in exchange for a free and honest review. All thoughts are my own.*

Goodreads Synopsis: It all started with the accident. The one that caused Sophie’s dad to walk out of her life. The one that left Sophie’s older sister, Meredith, barely able to walk at all.

With nothing but pain in her past, all Sophie wants is to plan for the future—keep the family business running, get accepted to veterinary school, and protect her mom and sister from another disaster. But when a hurricane forms off the coast of North Carolina’s Outer Banks and heads right toward their island, Sophie realizes nature is one thing she can’t control.

After she gets separated from her family during the evacuation, Sophie finds herself trapped on the island with the last person she’d have chosen—the reckless and wild Finn Sanders, who broke her heart freshman year. As they struggle to find safety, Sophie learns that Finn has suffered his own heartbreak; but instead of playing it safe, Finn’s become the kind of guy who goes surfing in the eye of the hurricane. He may be the perfect person to remind Sophie how to embrace life again, but only if their newfound friendship can survive the storm.

I feel very fortunate to have received this ARC in exchange for review. I was interested in this book after seeing the description of this being a novel about surviving a hurricane. I have never read a book about two people trying to survive a hurricane. But unfortunately, this book didn’t do much for me and parts of it were frustrating to read. Here’s the break down of my thoughts:

Overall: This just wasn’t exciting, somewhat boring and had a terribly forced romance that I could never get behind. Everything was fine and happy in the end with no struggles or meaningful character growth. I don’t think I will try anything else by this author in the future. This was fine, but not one I would necessarily recommend.