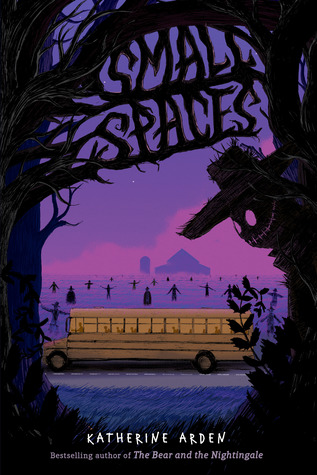 Goodreads Synopsis: When eleven-year-old Ollie lost her mother in a plane crash, she sought solace in her books. So when she stumbles upon a distraught woman standing on the banks of the river intent on throwing a book into the water, Ollie stops her, steals the book and rides away on her bike. Upon reading, Ollie discovers a chilling ghost story about a girl, Elizabeth Morrison, who is being chased through cornfields filled with scarecrows by two brothers with deadly intent. When she finds the graves of Elizabeth Morrison and her tormentors, Jonathan and Caleb, on a farm during a school trip, on a day already full of odd occurrences, Ollie starts to think this book is more than just a book. On the ride home, the school bus breaks down along the side of the road and none of the kids or their teacher can get service on their cell phones to call for help. And then Ollie’s digital wristwatch starts a mysterious countdown, with the word RUN spelled out on the face. She and two unlikely new friends are the only ones to heed its warning. As night begins to fall, they head out into the woods, bracketed by fearsome scarecrows. The bus driver gives them a word of advice. In order to survive whatever is coming, they’ll need to keep to small spaces.

I bought this on Kindle mainly based on the cover and the premise. After having such fun with City of Ghosts, I wanted to give some more middle grade a chance. Plus this one was about a girl and some school kids who have to find small spaces to escape the creepy Smiling Man. Sounds cool right? While I did enjoy it, I think this was underwhelming in some ways and there was another problem I had that never felt truly addressed or resolved.

But the thing I enjoyed the most was the setting itself. It’s set in a small town in Vermont, where farming is more common and there’s lots of corn fields. It’s eerie at times when Ollie reads the book Small Spaces that tells the story of a girl and two brothers that are haunted by the Smiling Man. Every time a scarecrow was described, I felt creeped out and I was glad that I don’t see a lot of them where I live. The story from the 1800’s was also creepy and you have that heavy sense of foreboding as Ollie read the story. I felt the pull like Ollie did towards the historical story; that was my favorite part of the book. The small town was cool, with fall leaves and a villain that isn’t as visible as you think.

The next thing I loved was Ollie’s dad. I don’t see dads in books very often that bake a lot and are very involved in their kid’s lives and we need more of that. I want to see a balance of both the mom and dad being very present in books. My dad cooks a lot as well, so I related to having a dad who likes to bake and cook a lot and that was awesome. Plus his awful puns were the sweetest and showed some of his character 🙂

The final thing I liked was the writing. While I can’t get into Arden’s adult fantasy series at the moment, her writing in this middle grade book was very well done. It’s not super flowery, but captures emotions and what the character feels/thinks very well. Here are a couple passages that I liked:

“You don’t waste October sunshine. Soon the old autumn sun would bed down in cloud blankets, and there would be weeks of gray rain before it finally decided to snow.” (pg. 1)

“You might get to know characters in books, Ollie thought, but getting to know a human was an entirely different thing.” (pg. 65)

“Wherever you go in this big world, gorgeous world, there is a ghost story waiting for you.” (pg. 83)

But there were a couple things that I didn’t enjoy unfortunately. The first thing I want to address is the aspect of bullying/being mean to other kids. Ollie is not a nice kid. Ever since her mother died, she doesn’t want to feel very much and she’s a distant young girl, even to her father who has also been struggling. She says some mean things and isn’t very friendly. There’s one girl Coco, who goes on Ollie’s journey and she’s a sweet girl but is very picked on and bullied. This is going to be a topic that parents will need to discuss how kids are mean and how to handle that. The bullying/being mean isn’t addressed at all (Ollie doesn’t think her actions of being mean are wrong) and that bothered me a little bit. Even the author’s prose doesn’t address this topic.

Another thing that I didn’t love was Ollie. Her situation of course is very sad and her behavior is understandable, but I feel like her recent loss of her mother kind of defined her as person. That’s the major thing that was mentioned and caused her actions. She was smart as far as directions, first aid, hiding and stuff like that, but I just didn’t connect to her. I liked Coco much more as a character.

The final thing that made the book underwhelming for me was the finale of the story. While the last half had great pacing, creep factor and all that, it was solved too simply. The Smiling Man wasn’t as scary anymore towards the end because I feel like he was simplified enough that he was easy to beat. I feel like the author made it easy for Ollie to “trick” the Smiling Man to beat him and then everything was fine. Now, I haven’t read middle grade in years so I’m trying to not let my adult mind/English major be too harsh, but the ending wasn’t what I hoped it would be.

Overall: While the setting, creep factor, the historical aspect and the writing made it a fun story, it wasn’t as good as City of Ghosts for me. I didn’t like the main character as much, an underwhelming ending and the fact that being mean to someone else isn’t addressed was worrisome. I would recommend this book for about 4th grade and up for kids. It’s not super scary but would make kids wary of scarecrows after reading it. I liked it enough and will continue reading middle grade, but it didn’t stand out for me.

Have you read this book? What did you think of it? What spooky middle grade books would you recommend to me?

8 thoughts on “Small Spaces Review: A Simple, Yet Underwhelming MG”