Happy Wednesday everyone! Today is finally my unboxing for the November Enchanted Book Box. This is a YA book box where you get a new release and some goodies like most other boxes. This one came very late which really disappointed me, but the content overall was fun. So let’s get into the unboxing! *SPOILERS AHEAD* 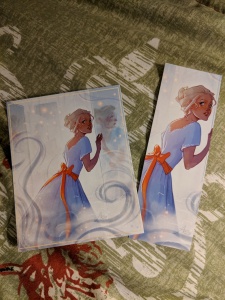 This month’s theme was Illusions and Lies, which sounded like an amazing box! It featured a new book that’s a standalone fantasy novel and contained items from Renegades, Throne of Glass, The Night Circus and others 🙂

The first thing I saw in the box was this beautiful candle that relates to the book. It’s called “Enchanted Seasonal Rooms” and it’s an apple harvest and cinnamon buns scent. It smells not only of Christmas to me, but a really yummy breakfast lol :p it’s a great candle for this time of year. This candle was custom made by Enchanted Book Box.

This tote bag is inspired by A Darker Shade of Magic by V.E. Schwab, with mentions of the different terms that’s used by Kell in the series. The tote was made by Enchanted Book Box as well. It’s a good sized bag, even though the straps seem a bit thin. But fans of the series will love this nice, simple bag!

Next is this beautiful Fae Prince pin made by Morgana0anagrom. I wasn’t sure at first if this was a fae character from the ACOTAR series or The Cruel Prince but it just seems to be a generic fae prince pin. It’s made of great material and looks very durable. I’m not a huge fae fan, but I know that many YA fans of Holly Black and Sarah J. Maas will love this pin.

Next is one of my favorite items in the box! This is a Hero or Villain shower gel made by The Soap Librarian. It’s inspired by the Renegades series by Marissa Meyer and it’s a black raspberry vanilla scent 😀 I live for fruity scents like this and it smells SO amazing. I want to find more stuff by this vendor. 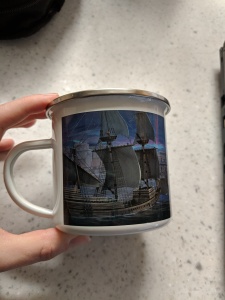 The next thing is this Throne of Glass inspired mug made by Ellunaarts and the spoiler card said that it was Rifthold. I don’t read the series, so I don’t know if Rifthold is a city or something, but it’s a nice mug! It’s a white mug and it’s a smaller mug than I’ve seen in normal book boxes. I think it looks really cool with the full graphic all around and it’s another fantastic item.

You guys this next thing was my favorite item in this box besides the book! This is a stunning art print of Celia from The Night Circus. It was created by Taratjah, who I think has had their work in Enchanted Book Box before. This is so simple with the black and white pallet but this couldn’t be more beautiful! I’ve been wanting an art print based on The Night Circus for some time, so I’m so glad to have my wish granted.

Now for the book in the box…

Behold! The book is Empress of All Seasons by Emiko Jean, which came out in early November. This is a Japanese inspired, standalone fantasy novel. The basic synopsis is that we follow Mari, who has been training to become empress. She enters the competition in which you must conquer all the seasonal rooms to become empress. But Mari is keeping her identity of being a yōkai  a secret, since they are both feared and looked down upon. I have heard that this book reminds some people of the Studio Ghibli movies which made me want it so badly! I’ve heard good things about the world building and the overall story. So I hope to read this book during this winter 😀

That’s it folks! That is what was in the November Enchanted Book Box 🙂 While I was disappointed that it came late, and came in a different box than normal, I did like many of the items in there. If you guys got this box, let me know what you thought about it. If you have also read Empress of All Seasons let me know your thoughts on the book down below!