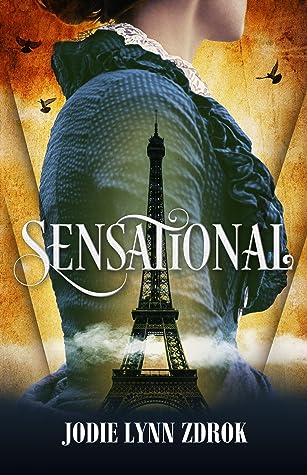 Goodreads Synopsis: The 1889 Exposition Universelle in Paris is full of innovations, cultural displays, and inventions. Millions of visitors attend over the course of several months…so no one would notice if a few were missing, right? Maybe–but someone is celebrating the 100th anniversary of the guillotine with a display of their own: beheaded victims in some of the Exposition’s most popular exhibits.

Nathalie Baudin’s ability to see murder scenes should help, but she’s suffering the effects of her magic more than ever before. Fortunately she has other Insightfuls to team up with–if they can be trusted.

So just this past week, Jodie revealed the cover of this book on her Twitter feed, along with the article highlighting the book. I really enjoyed Spectacle, which came out earlier this year. I had seen some blogger friends read this early and loved it and I echo them! Spectacle is such a great YA murder mystery book that feels like Jack the Ripper and there’s one scene in the Paris catacombs that STILL freaks me out to this day! Plus, the ending has one of the BEST final paragraphs I’ve ever read! (Don’t take this as a chance to just go read the end, read the book first :D)

For those of you who don’t know about book one, it’s about Nathalie who writes for the daily morgue column of a newspaper. (Back in the day in Paris, people went to go see dead people as a past-time.) She touches the glass of one of the viewing panes and she sees a vision of how the girl gets murdered from the killer’s POV. As she tries to nail down who this killer is, letters start coming to the newspaper from the killer and they seem to know who she is. Time starts ticking as she races to try and stop the killer before more murders happen and also discover why she could be connected as well. It’s such an awesome book!

After reading the ending book one, I could NOT wait to see what Jodie was going to give us next. I love the idea of the 1889 Exposition Universelle to be the setting for the second book, especially if there’s murderous things happening. I wonder how the spectacle of the Expostion will be and also see how this whole story comes to fruition. I’m excited to see another POV on this event in history, since The Gilded Wolves also used this event as a backdrop for the book.

If there’s any release of next year that I NEED with every fiber of my being, it’s this one! There’s gruesome murders, a light fantasy element and awesome writing that made the first book such a favorite for me this year. I still think about it to this day since reading it and I can’t recommend it enough if you love reading historical books. Please keep this series on your radar and you don’t have to wait long until this book is out 🙂

Have you read Spectacle? If so, did you also love it? Let me know in the comments!