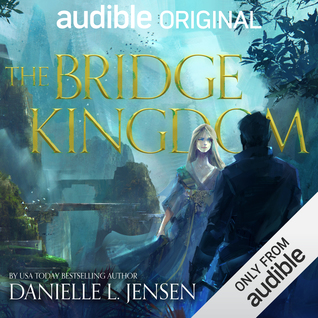 Goodreads Synopsis: What if you fell in love with the one person you’d sworn to destroy?

Lara has only one thought for her husband on their wedding day: I will bring your kingdom to its knees. A princess trained from childhood to be a lethal spy, Lara knows that the Bridge Kingdom represents both legendary evil – and legendary promise. The only route through a storm-ravaged world, the Bridge Kingdom controls all trade and travel between lands, allowing its ruler to enrich himself and deprive his enemies, including Lara’s homeland. So when she is sent as a bride under the guise of fulfilling a treaty of peace, Lara is prepared to do whatever it takes to fracture the defenses of the impenetrable Bridge Kingdom.

But as she infiltrates her new home – a lush paradise surrounded by tempest seas – and comes to know her new husband, Aren, Lara begins to question where the true evil resides. Around her, she sees a kingdom fighting for survival, and in Aren, a man fiercely protective of his people. As her mission drives her to deeper understanding of the fight to possess the bridge, Lara finds the simmering attraction between her and Aren impossible to ignore. Her goal nearly within reach, Lara will have to decide her own fate: Will she be the destroyer of a king or the savior of her people?

I originally heard of this book and really had it on my radar on Riley Marie’s booktube channel, which I watch on occasion. I had also heard of Jensen with her Malediction trilogy (Stolen Songbird) and I still really want to read her newer YA fantasy Dark Shores. But I was interested in this one after seeing Riley give it such a high rating and I also wanted to see how I would like a fantasy romance. Normally, I’m more of an epic, historical and urban fantasy person but I wanted to try a different subgenre of fantasy. So I got it on Audible a while ago and finally got around to it and this really surprised me! This was such a good time with great narration, romantic tension and a really cool fantasy world.

First, let’s talk about the audio book quality! (This is available through Audible Escape, which is their romance package type deal. It’s a bit extra a month but you get romance type audio books for a cheaper price and this is one of them as of this review. But you can also buy the paperback and hardcover on Amazon and other bookseller sites now.) But this book has storm sound effects in between the chapters! That was a really nice touch, since this the country of Ithicana has storm seasons and it was a small detail that got me more into this fantasy world. Besides the storm sounds, the narrators were fantastic! I have enjoyed Lauren Fortgang in the past with her narration of Shadow and Bone so she brought her game her too with voicing Lara. But this was my first audio book with James Patrick Cronin voicing Aren and he was great! He brought the grit, uncertainty, confidence and also romantic tension through his voice work. Both played off each other very well and they make a great pairing.

Next, let’s talk plot! Lara is from Maradrina, a desert kingdom and her father is the ruler. She was raised with several of her half sisters at a secret desert compound, where they are trained to kill, spy, seduce and be ready to carry out their duty: one of them will marry the king of Ithicana, kill him and find out how Maradrina can control the Bridge. The Bridge is a huge bridge that controls all the trade between all the countries and Ithicana controls this massive structure. The way the bridge is operated is a mystery to outsiders. So in the beginning of the book, Lara is the one that ends up going to be Ithicana’s new queen, after the original sister that was picked (along with the other sisters) are poisoned. Now, Lara has been taught that the people of Ithicana are bloodthirsty demons. They don’t care about human life, hunt innocent people for sport and want everything for themselves. Maradrina is a starving country and Lara wants to do what’s best for her people and she does hate her new husband and his country due to what she’s been taught. But of course, as she learns more about Ithicana and sees what happens behind scenes, Lara finally forms her own opinions and learns the truth. I liked how while she does stick to her guns, she can’t help but realize who the enemy really is. Her growth, as I keep thinking about it, was very authentic as a person who was raised to be a killer and brainwashed to carry out someone else’s agenda and then she comes into her own intentions.

Then, we have Aren who also his own perceptions about Lara and Maradrina. He wonders who Lara really is and doesn’t always trust her. But he’s also dedicated to his country and I LOVED Aren so much! He has a lot of rough edges, but he’s fighting to do the right thing and wants to truly do the best for his people. He isn’t immediately distracted by Lara and instead keeps her at arms length to see what she’s like. They go through a few experiences together and her reactions surprise each other and eventually, he realizes that he’s falling for her. While this first book is Lara’s central book, I liked seeing how Aren is both tough and hard edged while secretly being afraid for his people.

Not only that, the ending was amazing! Things really came to a head and a few moments were SO satisfying! The book ends in a fashion that makes way for the second and final book in a such a fantastic way. While it is a cliffhanger, it isn’t a devastating one lol. But this story was so addicting, immersive, sexy, well thought out and a great character growth in Lara. I constantly kept listening when I had time. The author creates such chemistry between Lara and Aren and this would make an amazing movie. I couldn’t get enough.

Next, I have to say that I really loved this fantasy world! I love the idea of a huge bridge being so vital for trade in all the countries and how any country would do anything to have it in their power. This is a plot detail that I haven’t seen in fantasy books before, especially with how the operation and how to take control of the bridge is so secretive. I liked how the Ithicanian’s keep the bridge close and the way the author reveals how the bridge is controlled is really cool. Plus I like that we have a fantasy world with all the storms, island and desert kingdoms along with the bridge. This was refreshing and while this isn’t a  book where the world is vastly explored like Brandon Sanderson does, but that’s okay and the author shows her world building talent in less detail and that’s even more awesome.

Any cons I have are small. I do wish that this book was at least 100 pages longer to explore more of Aren and also the tension of the people of Ithicana not trusting Lara. I think that she got away with things too easily with sneaking around and there wasn’t enough tension with that. I also think that the battle scenes should’ve been longer too; they felt like summaries of what happened instead of having Lara and Aren right in the middle of it. But these are small cons and I’m certain that the sequel will have more action in it. I will also note that there is one graphic sex scene and a near sex scene in this book, so this is new adult/adult for a reason. But despite those couple scenes and some language, this isn’t an overly explicit or dark book. I think this is on the lighter end of fantasy books.

Overall: This book really surprised me and I ended up listening to a lot of it in one day to finish it. With great narration, storm sound effects, cool world, great chemistry and satisfying ending/cliffhanger, this was great. I’m glad that I found a sub-genre in fantasy that I liked and I’m so excited for the sequel. While it could’ve been longer to expand on some things and provide more genuine tension, this was still a great time.

Have you read The Bridge Kingdom? If so, what did you think of it? What are other fantasy romances that you like? Let me know in the comments!