Happy Monday everyone! I hope your weekend was good. Today is a double review and it’s going to be my only official blog post for the next month. Starting this Wednesday the 11th, I’m taking an official blogging hiatus for an entire month. But I wanted to get these two reviews out of the way, since I recently finished them before my hiatus. So let’s jump in! 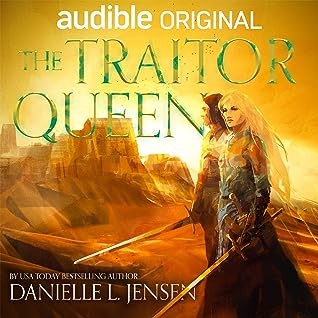 Goodreads Synopsis: Lara has only one thought when her husband is taken prisoner: I will do whatever it takes to set you free.

A queen now in exile as a traitor, Lara has watched Ithicana be conquered by her own father, helpless to do anything to stop the destruction. But when she learns her husband, Aren, has been captured in battle, Lara knows there is only one reason her father is keeping him alive: as bait for his traitorous daughter.

And it is bait she fully intends to take.

Risking her life to the Tempest Seas, Lara returns to Ithicana with a plan not only to free its king, but for liberating the Bridge Kingdom from her father’s clutches using his own weapons: the sisters whose lives she spared.

But as Lara and her companions formulate a plan to free Aren from her father’s palace, they soon discover that while it is easy to get in, it will be quite another thing to get Aren, and themselves, back out. Not only is the palace inescapable, there are more players in the game than Lara ever realized, enemies and allies switching sides in the fight for crowns, kingdoms, and bridges. But her greatest adversary of all might be the very man she’s trying to free – the husband she betrayed.

With everything she loves in jeopardy, Lara must decide who – and what – she is fighting for: her kingdom, her husband, or for herself.

I just finished the first book in this duology The Bridge Kingdom at the end of last month, so when it was release day, I spent my own money to get this book on Audible. The first book ended on an interesting cliffhanger so I started listening right away. While the author has recently announced that there will be more books set in this fantasy world, Lara and Aren’s story is only in these two books. I was really excited to see how this duology would end.  I really enjoyed this sequel/conclusion, but due to one aspect of the romance that I found a bit annoying, this wasn’t a 5 star read for me. Let’s break down my thoughts:

Overall: Despite being frustrated with part of the romance and a rushed conclusion, I do recommend this duology if you’re looking for another fantasy romance. The audio books are so well done and narrated and this sequel was intense, mostly satisfying and had a good ending overall. I’m also glad that there will be more books in this world. Aren is my fictional crush now and I’m glad that Lara grew on me more and again, the author shows great character growth from her. I’m so glad I gave this series a chance.

Title: The Empire of Dreams (Girl of Fire and Thorns #4)

Goodreads Synopsis: New York Times-bestselling author Rae Carson makes a triumphant return to the world of her award-winning Girl of Fire and Thorns trilogy in this extraordinary stand-alone novel. With action, adventure, and a heroine set on destroying the patriarchal limits meant to keep her in her place, The Empire of Dreams once again proves that Rae Carson is a master of epic fantasy.

Even though Red Sparkle Stone is a foundling orphan with an odd name and a veiled past, she’s about to be adopted into the royal family—by Empress Elisa herself. Sixteen-year-old Red can hardly believe her luck. Then, in a stunning political masterstroke, the empress’s greatest rival blocks the adoption, and Red is left with no family and no future.

Grieving and lost, but determined to find her place, Red hatches a daring plan: she will prove herself as a recruit for the world’s most elite fighting force, the legendary Royal Guard—something no woman has done before. But it’s no coincidence that someone wanted her to fail as a princess, someone whose shadowy agenda puts everything she loves at risk. As danger closes in, it will be up to Red and her new friends—and maybe some new enemies—to save the empire. If they can survive recruitment year.

Here’s the thing: I struggle sometimes when authors return to old series that were finished years ago. Sometimes I feel like they can be crash grabs (the newer books in the Uglies world for example), but other times it works so well (the second era Mistborn books or the Avatar: the Last Airbender comics as other examples). So when I found out this book was coming out after the original trilogy finished, I was curious and worried at the same time. I read this original trilogy 3 years ago and I loved the first book, but didn’t love how it ended. For this new book, being a new story from an old series, this was just okay and didn’t hit the mark for me. I feel like this isn’t necessary to read unless you loved the original trilogy and want to see where some characters ended up. But let’s break down my thoughts:

Overall: This was just okay in the end and like I mentioned earlier, I would only read this book if you loved the original series and have to see where those characters ended up. While I like the past chapters of Red’s childhood and being in this fantasy world again, this does feel a little bit like a cash grab and Red didn’t feel like she was as effected by her past. She almost seemed like a totally different character during the current chapters and plus her “affinity to magic” was poorly explained and felt like a easy plot device. I recommend the original series or her Gold Seer series instead.

Have you read these? Are you excited for them? Let me know in the comments!

One thought on “Double Mini Reviews: The Traitor Queen & The Empire of Dreams”