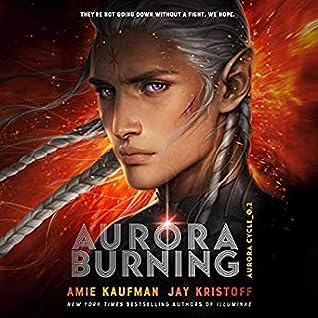 Goodreads Synopsis: Our heroes are back… kind of. From the bestselling co-authors of the Illuminae Files comes the second book in the epic series about a squad of misfits, losers, and discipline cases who just might be the galaxy’s best hope for survival.

First, the bad news: an ancient evil—you know, your standard consume-all-life-in-the-galaxy deal—is about to be unleashed. The good news? Squad 312 is standing by to save the day. They’ve just got to take care of a few small distractions first.

And the cadre of illegit GIA agents with creepy flowers where their eyes used to be, who’ll stop at nothing to get their hands on Auri.

Then there’s Kal’s long-lost sister, who’s not exactly happy to see her baby brother, and has a Syldrathi army at her back. With half the known galaxy on their tails, Squad 312 has never felt so wanted.

When they learn the Hadfield has been found, it’s time to come out of hiding. Two centuries ago, the colony ship vanished, leaving Auri as its sole survivor. Now, its black box might be what saves them. But time is short, and if Auri can’t learn to master her powers as a Trigger, the squad and all their admirers are going to be deader than the Great Ultrasaur of Abraaxis IV.

Shocking revelations, bank heists, mysterious gifts, inappropriately tight bodysuits, and an epic firefight will determine the fate of the Aurora Legion’s most unforgettable heroes—and maybe the rest of the galaxy as well.

HOLY CRAP YOU GUYS! I blew through the audio book in less than a week which is saying something! I couldn’t wait to get back into this series and see my squad children again! We pick up not long after book one and Tyler and the others are still reeling from what happened to Cat on Octavia III. Plus, they have no idea on where the Weapon is that Aurora needs to use to defeat the Ra’haam. But time is running out before all the crap hits the fan.

First just let me say one thing: KAL! This is more of his and Aurora’s book and their SHIP IS EVERYTHING! I was dying for more of their relationship and it was pretty satisfying. While I know there are some negative comments about how this is “instalove” but I don’t care. It’s written well 🙂 Plus their relationship actually deepens and changes them as people too and it was nice to see the good and also sad things throughout the book. Steve West as Kal and Kim Mai Guest as Aurora bring the longing, love, joy and other emotions to make this story a roller coaster.

We also learn a lot more about Aurora’s powers and some of the overall plot with the Ra’haam, a conspiracy and the Eshvaren which was awesome. I have no idea who the real enemy is and that right there is an ode to how great this author duo is together. While Tyler and his squad are the good guys, how do you know who your real enemies are? I love how that is challenged.

The next thing to talk about is Kal’s evil sister Saedii. This was SASS POT ELF CHICK! She kicks butts and takes names and she throws quite the wrench into the squad’s journey. Her role to play wasn’t what I expected but also really liked. I wonder how much she’ll be in the third book but there were a couple moments where she felt like one of the squad lol.

One thing that I also really liked was how Zila’s chapters are longer this time. We hardly got to know her in the first book, bu luckily a lot of that is improved in this one. While Finian’s chapters are also not as often, I liked having some balance with more Zila and seeing her changes. With having 6 characters now to tackle in a series, you have to sometimes pick one character or two to have less POV time than others but it didn’t bother me at all.

Let’s just say that this second book is EVIL! I was a mess after I finished it and I haven’t hungered for a sequel THIS BAD! That’s all I’m going to say lol. Still read or listen to it now and discuss it with other people. Don’t sit on this sequel until the last book comes out. There’s so much awesomeness to digest and learn. While I’m still in a hangover over this book, I’m so happy I got more story and I’ll just have to seriously try and be patient. These authors are GROUNDED right now in my book until the last book lol :p but they are geniuses.

Overall: While I do think that the plot of book one was a bit richer as far as fun missions and hi-jinx, I still this sequel is perfect with the new people, revelations, romance, etc. Kal is one sexy, broody space elf who is amazing and Tyler is quickly becoming another top favorite character. Scarlett also had a few inner monologues that had me cackling. This series is everything to me!

Have you read/listened to this yet? Did you love this sequel as much as Aurora Rising? Let me know in the comments!