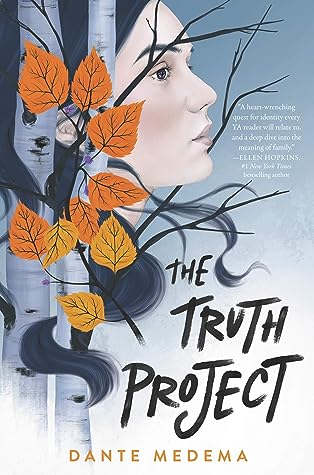 Genre: YA Contemporary/Novels in Verse

Goodreads Synopsis: Jessica MacLeish at HarperTeen has acquired, in a five-editor, six-figure auction, debut author Dante Medema’s The Truth Project. An Alaskan high school senior’s genealogy project alters her world forever when she learns her biological father is not the Shakespeare-loving man who raised her, but a Seattle musician. Rocked by the news and forced to keep numerous secrets, including that she’s the product of an affair, the teen searches for the truth while also falling for her town’s resident bad boy. Publication is set for summer 2020; Alyssa Miele will edit. Louise Fury at the Bent Agency negotiated the deal for world English rights.

So this book…what a gem! I found out about this book during the perfect set of circumstances! I watched the most recent book haul from Kristin at SuperSpaceChick, who is one of the best booktubers out there! She had been sent an ARC of this book, and its synopsis, about a girl who takes a DNA genealogy to find out the truth about her family, really struck me and I immediately requested an ARC from Edelweiss. (Harper Collins is THE best publisher on Edelweiss) I got the ARC not long after requesting it and when I was in a weird reading mood (AGAIN, stupid pandemic), I started this book.

I READ THIS BOOK IN ONE DAY!

This rarely ever happens anymore. The books in my recent memory that I read within 24-48 hours were The Kingdom, Pretties (Uglies #2), The Liars of Mariposa Island (mostly out of boredom) and the audio book of Be Not Far From Me. So while I’ve had a few lucky chances these past few years, nothing CONSUMED my thoughts more than this book. I loved the idea of a girl using her genealogy to figure out her identity. And I’m very happy to see that this is one of the top 3 books I’ve read so far this year!

Let’s back up a bit now. This book is written in verse, which is a type of writing style I’m still getting into. I like some of the poetry formats and learning some of that in college, but I was never sure how I would novels in verse. But then books like The Poet X and Long Way Down quickly started changing my thoughts. This book is no different, with using verse, emails and text messages to tell this story. I think format was perfect because we get Cordelia’s inner raw emotions through the verse poetry that I think translated perfectly. There many little lines and passages that made me ponder about them. Some passages really hit hard as well. The comparisons of winter thawing to the time getting closer for the truth to come to the surface were really impactful. The emails and social media messages were also great, especially between Cordelia and her best friend Sanna. Sanna’s quirky and often brutally honest personality really shines in these text messages and their friendship was so palpable! I usually never expect how mixed media will portray a book’s themes, tension, emotion, etc. but this was done so so well.

Now let’s talk about the meat of this story: Cordelia’s DNA test and its results. I have done genealogy in my life and it’s really important to me. I did genealogy for one side of my family because I was curious of where I came from. While there’s no famous heritage, I was really proud of learning how to find more ancestors. While what Cordelia does isn’t really the same, I like that discovering your past and seeing how that effects your identity is something we don’t see anymore. This plot line is really unique, as it really forces Cordelia to look at herself when she gets the results. Since she’s the result of an affair, her expected reaction of distrust, wanting to scream and be confrontational, crying, feeling lost…all of these emotions are expected. How else can you react when you discover a secret like this? When this reveal happens early in the story, I knew right then that I couldn’t put this book down. This compelling plot, along with the mixed media format, compelled me to finish this book in one day and to me, that shows the author’s craft of this story. I also liked how seeing how this result affects everyone else around her. Her younger sister Iris thinks that Cordelia is distant and changing, her Dad loves her but is sad of how his wife is acting and of course, her mom is crying a lot more, drinking more wine and can’t approach Cordelia about her past. Without spoiling too much, I will say that this DNA result really shakes Cordelia’s world and all the complex and messy emotions that you see are done so well and are so understandable.

The second part of this story is Cordelia trying to track down her biological father. She contacts him via the DNA test website and as they start talking, Cordelia starts to feel that hole she’s felt in her life start to be filled. But her mother warns her about her biological father. But since her mother never told her truth and has acted strange and not very forthcoming, Cordelia decides to take matters into her own hands. Cordelia’s stubbornness is very present and I understood why she was this way. Her mother hasn’t been very affectionate, keeps telling her what to do and again, isn’t forthcoming with talking about the past. Without spoiling anything, the way this part of the story unfolds was fantastic! Cordelia really gets deep into the truth about her father and while some of her decisions aren’t the best regarding finding her dad, they were understandable and luckily, she has her friend Kodiak Jones beside her. This story wrapped up really well and in an emotionally satisfying way.

Then, we have to talk about Kodiak Jones and Cordelia’s dad! This is a boy who Cordelia grew up with and has had a crush on since she was young. But the year before this book starts, Kodiak started making some immediately negative life choices. He goes through a lot and we only see through her eyes of how’s both different and then the person she thinks she once knew. But he’s such an amazing boy and love interest! He’s respectful, caring, supportive and overall a great guy. I also like a few lines we hear from his own works. Then we have her Dad, whose a literature teacher and quotes Shakespeare a lot. This is a father figure we DO NOT see often enough in YA! He never judges Cordelia for her actions, but also gives her space and doesn’t pressure her to say what’s bothering her. We see his sadness and confusion on why she’s acting differently around her family, but he’s still there for her no matter what. Her dad loves her unconditionally and THIS right there is a dad figure right here. I hope that teens will read this and feel the love of family in this book and hopefully this will warm people’s hearts like it did for me.

Basically, this book was truly amazing! This is such a great debut full of anger, messy feelings, family relationships, love and a real raw coming of age story. The author’s talent really shines in this book and I can’t recommend it enough. Now after finishing this, I want to read more YA books written in verse with how powerful the few I’ve read have been. This comes out in October, so I really hope that you guys request it for your libraries, request an ARC to read or at least put it on your radar for when it comes out. This is one you can’t miss! If I really had any cons, I would say that at least once, a moment of truth wasn’t completely clearly stated but that’s it. I don’t have anything negative to say. I needed this book at the right time and I loved it.

Have you heard of this book? Are you excited for it? What other YA books in verse would you recommend?