Happy Wednesday everyone! Today I wanted to bring something that is a fun concept: an anti-haul. A few Booktubers actually do this where they list the upcoming books and why they’re not excited for it. I like this idea, since so many of us are focused on the ones we ARE excited for. While these aren’t in any special order, here are some books coming out soon that I’m not interested in for various reasons.

1. The Invisible Life of Addie LaRue by V.E. Schwab

While I do like her Cassidy Blake middle grade series, I haven’t been fan of this author’s adult fantasy stuff at all. While I’m not sure about her YA series like The Archived, I’m not anticipating this one. I think the main reason is because I thought her Shades of Magic series is terrible and not worth the hype. I’ve also seen legit critiques about her other books and also, with the amount of hype on this one, I just don’t care? I’m not sure if her adult stuff is for me…

While I am going to try this book, I don’t have a lot of faith in it. I read her previous book The Girl the Sea Gave Back and thought it felt like an unfinished, rough draft story with no emotion and I didn’t get the character’s romance at all. It felt way too short and not meaty enough. Since this story has been getting a ton of hype, I will only get this from my library if they get it. But since I was very disappointed by the first book I read by her, I’m not sure about this one…

3. Kingdom of the Wicked #1 by Kerri Maniscalco

While this does have an awesome cover, I have nearly no interest in this book. I tried her debut novel Stalking Jack the Ripper and though it was terrible. It was boring, the protagonist was a walking stereotype (to me) and it never felt like the Jack the Ripper aspect really took off? I ended up DNF’ing that book due to boredom. So naturally, I’m not excited for the next book. It sounds like it’s not really gonna be the dark fantasy it seems to promise. I imagine it’ll be another run of the mill YA fantasy that tries to be dark but ends up being the same thing that other series end up being. Plus it sounds like it’s gonna be another fantasy book where the romance will overwhelm the actual plot and while I do like a good romance, it can’t overwhelm the main story and that’s a pet peeve for me. So, not looking out for this one.

So…this is the THIRD time we’re getting the first Twilight book, but now it’s from Edward’s perspective. Cash grab anyone? From the original book, then the 10th anniversary edition where it was gender swapped and now this? I knew about this book back when it was rumored to come out before it was leaked. But I just roll my eyes. This isn’t anything new, just a slightly different way of reading the first book again. Plus we all know how BAD and TOXIC the relationship between Bella and Edward, so why are people excited about this? Not even my teenage self would be excited to read the same book again, just a little different. This is a big NOPE for me.

5. How the King of Elfhame Learned to Hate Stories by Holly Black 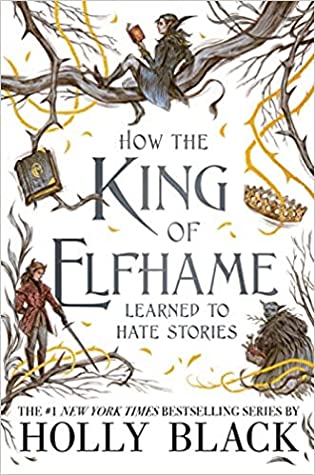 To me, this is yet another cash grab to make more money. This is another book set in the Cruel Prince series all about Cardan and I could care less. I never wanted to read this series anyway, so it’s silly that less than a year after the series ends, there’s already another one announced. It has a nice cover but I’m not on the train for this one. I know I can sound a bit harsh, but this series has been recommended so many times when I won’t read it that it just has a a bad taste in my mouth lol.

What books are you not anticipating? Do you agree with these? Let me know in the comments!