Happy Friday everyone! I’m finally back with my Sailor Moon discussions! I am behind on these but now it’s time for talking about Sailor Moon R, or season 2. If you missed my thoughts on the first season, my post is linked here where I talk about viewing this classic anime as an adult, as well as the new dub. I won’t be talking about the dub much here except for new characters. There also most likely will be spoilers since this anime concluded about 20+ years ago, so you have been warned just in case. Let’s jump in!

Thoughts on Season 2 as a kid/young teen

This season was one that I did watch on TV more when Toonami on Cartoon Network was a thing. I remember loving the second story arc with Neo Queen Serenity and how Sailor Moon and the Sailor Guardians fought against Wiseman and the Dead Moon Clan. I loved seeing Usagi/Serena in the future and what Neo Crystal Tokyo looked like! I actually did read a couple volumes of the original manga, so seeing the future story line was familiar to me. Although I hated Chibu-Usa and her stupid childish antics, I was always glued to the screen whenever this came on!  While now, trying to think back, I didn’t watch as much of the first story arc with Ali and Ann, the two aliens with the Makai Tree. Either I forgot the show was on during certain days of the week, but I remember liking it as much as the first season. Also, anytime Tuxedo Mask showed up, I always loved seeing my crush lol! The final thing I remember being fascinated by was seeing Sailor Pluto, the guardian who guards the Door of Space and Time. Pluto is one of my favorite guardians with her garnet time rod, as well as her whole character design!

Things I Notice as an Adult

2.  I liked that Mamoru had moments of more character development/conflict: This second season had a curve ball with Usagi and Mamoru’s future child, Chibi-Usa fall from the sky and say she’s from the future. While they don’t know it yet, Mamoru starts having nightmares that warn him about being with Usagi. These visions about the future and the possible destruction to come scares him, so he begins cutting himself off from Usagi. This does create some romantic agnst/drama between the two, but it does interesting things for both of them. Usagi does have moments where she calls Mamoru out for his attitude, apologizing if she was out of line but also admitting that she knows he’s lying and wants him to stop. But his fear takes over for some time and he doesn’t come to her rescue like he usually does. This shows that Mamoru does care for Usagi, but everyone is human and fear can get the best of us. But I like that he is also tested, later in the season, when Rubeus and the Four Spectre Sisters cause Sailor Moon to fall into a deep sleep. While he’s afraid of the future, his love for Usagi ultimately comes through and his kiss wakes her up. I just liked seeing how their relationship was tested but they both had their struggles and fears before they eventually overcame them.

3. This season really did show that enemies can be understood if given a chance, that no one is ever truly evil: One thing I did like though that does happen in more seasons the show is how the Four Spectre Sisters eventually turn good. Like human girls, they suffer from insecurities and personal flaws and they never appear heartless such as Rebeus or especially Wiseman. I liked seeing how each sister learned what emotions and being human really meant and how the Sailor Guardians helped each of them. Their slow realizations of them being brainwashed and manipulated shows the true colors of other characters and also provides more plot for later in the story arc. This shows how the Black Moon is a cult that takes minds easy to manipulate and ends up turning people/other beings from a different dimension into slaves, but through freedom, they see for the first time in a long time and their ability to finally choose for themselves is rewarding to see. We even see this in the head of the Black Moon Prince Demande, who sees who really is pulling the strings after some shocking revelations and a death that turns him against Wiseman. While he doesn’t really apologize for the things he’s done, his actions to help Sailor Moon and the others was enough to show that he had enough of being told what to do and try to set things right. 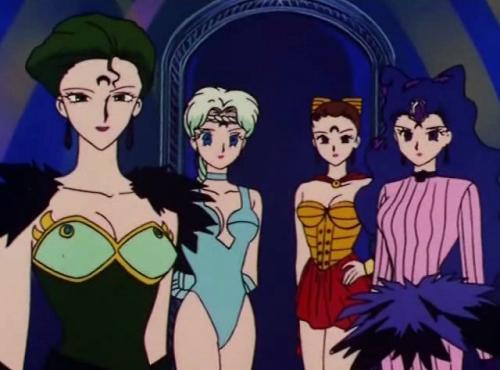 4. Chibi-Usa’s Black Lady story arc really is twisted: Since Chibi-Usa is a small child who acts very spoiled, jealous and even manipulative at times, she is lonely after what happened in the future. She’s given the hard task to go back to the past and get her mother’s past self to help her fix the future. Her ties with the Black Moon become even stronger with them trying to find the Silver Crystal, which she didn’t realize she possessed. But when Wiseman gets ahold of her, he twists her jealousy of Sailor Moon and her loneliness and makes them even worse. This manipulation turns her into Black Lady, his right hand minion. She’s always wanted to be an adult and be noticed and not be lonely anymore and while I did hate her when I was younger, I understand better that she was a kid who was scared and was shocked by what happened. She didn’t know who to trust and she did refuse to listen to those who tried to help her. This also shows how bad guys really are like Wiseman: they don’t care who they manipulate, but they take advantage of those in pain or confused to force them over to darkness. What’s worse is how Wiseman shows Sailor Moon twisted images of Mamoru falling for Black Lady and he tries to break her that way. That is seriously twisted, since Mamoru is Black Lady’s dad, so this shows the ugliness and disgusting nature of evil. Evil doesn’t care about morals and that’s why Wiseman is a formidable enemy. Now while Black Lady wasn’t as much of a threat as I had expected, it was a good move to see how Chibi-Usa IS forced to see how Sailor Moon was always telling the truth about helping her and she comes to know that she’s being manipulated and is able to return to normal. I do wish however that the Black Lady arc was longer, showing more conflict and more of a threat to the guardians. That would’ve created more development for the guardians, as well as a deeper connection to Usagi and Chibi-Usa and Mamoru. 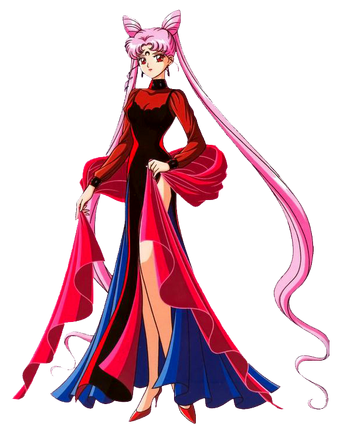 The biggest thing I noticed for the new English dub is that they got a better voice actress for Black Lady, since her voice sounded too electronic and mixed in the original English dub. But this new voice actress sounds like she’s right there, talking to them, instead of sounding far away and also using a microphone to talk. Plus I feel like there’s more emotion in the new dub for Black Lady; there’s more hatred and deep sadness as well. But one thing I didn’t agree with is the new voice for Wiseman; he sounds less intimating and sinister when compared to original dub voice actor. The original dub actor had a much darker tone to his voice and had a better command of those he controlled. The original dub suited his nature far better. I’ve listed a couple videos down below that show different comparisons of the voice actors to show the difference. New dubs of anime always have both and not so great changes, as is normal with different voice actors. Hardly any English dubs are completely perfect as far as voice casting. As far as the other voices, such as the Four Spectre Sisters, Esermaulde, Prince Demande and the other Black Moon enemies, the new dub is well done and nothing to complain about.

Angel or Devil? The Mysterious Girl from the Sky

Journey to the Future: Battle in the Space-Time Corridor

The Final Battle Between Light and Dark: Pledge of Love to the Future

This season isn’t quite as strong for me as the first season. With the first half having paper-thin villains and poor monsters, the first half doesn’t inspire to watch all of the episodes. But the second half is better with the Black Moon and the fight for the future. While Chibi-Usa is still really annoying, Prince Demande’s odd lust for Sailor Moon being short lived, not enough Sailor Pluto and also Black Lady’s arc not reaching its full potential, this is still a solid season. I’ve always loved Sailor Moon’s Moon Scepter and some of the new guardian attacks. I also liked that Wiseman is a much darker villain than I realized and his manipulation runs deep and sometimes very twisted, which most villains never truly reach. This season feels more choppy compared to the first one, where the plot was much more drawn out and you knew the single purpose. But the future story line is enough to make it stand out more than the first half. I did end up changing my rating for the first season, being a 7.5/10 for a lot of nostalgia and classic scenes. This season is more of a 6/10 with the criticisms that I mentioned. But if you haven’t seen a lot of this season, the last half is really worth watching.

What do you think of the second season of Sailor Moon?